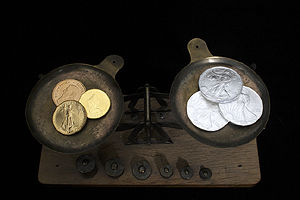 Bullion coins offer a solid, precious metal hedge from financial uncertainty and instant liquidity worldwide. But bullion prices can be volatile due to ETFs or short-term speculation and do not offer the privacy of ownership that numismatic gold provides.
(Read more on the history of gold, silver & platinum bullion) 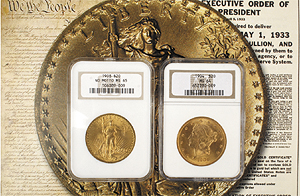 Numismatic is defined as "the study and/or collecting of rare coins, medals, and related objects." Generic Numismatics refer to the most popular common-date investment- grade coins, such as the $20 Liberty, $20 Saint Gaudens gold coins and famous Morgan Silver Dollars.

Investment-grade coins (graded Mint-State 62 and above) are traded daily worldwide based on their scarcity, independently certified condition and market demand, thus meeting all of the qualifications for both investors and collectors. Numismatic coins are 100% private and considered one of the few "non-reportable" assets remaining.
(Read more about Numismatics)

U.S. rare coins have historically outperformed bullion coins because of their very limited supply and ever growing demand. 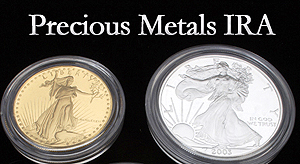 Did you know the U.S. Government has allowed Americans to place certain types of U.S. gold and silver coins into retirement plans since 1986? It's true!

Invest in precious metals now with no out-of-pocket cost! Save on taxes by rolling over your retirement plan into U.S. gold coins!

We can help you transfer paper assets into gold with no tax penalties or new contributions, by converting an existing IRA or other retirement fund into a "Self-Directed Precious Metal IRA".
(Read more about Precious Metal IRAs)

STRATEGY: We suggest all forms of coins be held for a minimum of 3-5 years, longer if possible. In the world of U.S. numismatic coins, it is the highest quality coins which usually have the best appreciation record over the long term.