As the chart below illustrates, over the last decade circulated Morgan Silver Dollars have risen 30% in price while silver bullion has remained level! We believe Morgan Silver Dollars, the most popular silver coins minted in U.S. history, have excellent growth potential. 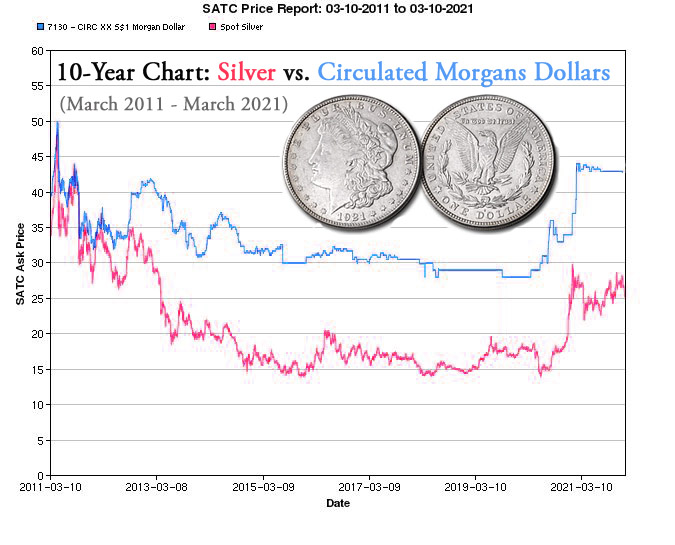 "Never in history has the price of silver been poised to accelerate as it will after this latest sell-off," reports Peter Krauth, Global Resource and Commodity Expert at Money Morning.

With gold prices above $1,200 an ounce, buying a single ounce can be a stretch for some. But silver, near $20 an ounce, can be purchased quietly and invisibly by nearly everyone - not just in the United States but all around the world.

Both silver and gold are easily storable and offer an alternative to a shaky, dollar-based financial system. Gold and silver can be stored at virtually no cost, which you can't say about most other tangible commodities.

The Chinese have a centuries-old affinity with silver. It began in the 1500s with the explosion of trade with Mexico via the Spanish galleons. China is now actively encouraging its citizens to buy both silver and gold.

1. Buying of Physical Silver is Red Hot
Despite the drubbing that silver prices have taken in the last 2 years, there's one aspect of the market that most observers are simply ignoring: the physical silver market. In fact, savvy investors were flocking to buy physical silver.

2. Sentiment is So Bearish, It's Time To Buy
Investor sentiment is often a great contrarian indicator because the herd usually does the right thing at exactly the wrong time. When the speculators' (dumb money) net short silver positions reach a major high, it's nearly always a perfect trustworthy signal for smart money to buy at or very near a major low.

3. Spendthrift Politicians Are Good for Silver
President Obama has been a strong driver for higher silver prices. In fact, he helped make silver the best-performing major financial asset during his first term. Another four years of Obama together with Fed Chairman Ben Bernanke's heavy reliance on the printing press could easily provide an encore performance.

4. Silver is a Great Inter-Generational Investment
In addition to serving as an excellent long-term store of value for today's baby boomer generation as they approach retirement via a Precious Metals IRA, Silver Dollars can also serve as an excellent gift item for children and grandchildren that will remind them of the real value of true and honest money.

Silver prices would need to rise above $125/oz. today just to reach the previous inflation-adjusted high of $50/oz. So, at under $20 an ounce, silver is still a mere fraction of the $100-$150 an ounce price projected by silver industry experts. Here's why;

For all these reasons the silver market certainly appears to represent a brilliant investment opportunity. Morgan Dollars are an excellent inflation hedge which are highly sought after by coin collectors, traders and investors alike because of their beauty, history and liquidity.