Thanks for your interest in learning more about real money, gold and silver coins! 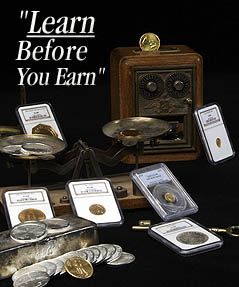 Swiss America was established in 1982 to assist Americans in planning a precious metals portfolio to help preserve wealth.

Today gold and silver coins represent a timeless store of value in a world of declining paper currencies. Tens of thousands of Swiss America clients have followed our simple 'Swiss Diversification Strategy' road map over the decades.

Before investing in precious metals it is important to understand the times in which we live and the market fundamentals driving the world back toward tangible assets in a world awash in debt and money substitutes.

The bullion and rare coin markets are driven by a variety of complex forces. Since 2001, both internal and external forces have combined to create a major "secular" bull market in all forms of "real" money.

The next step is to review the types of gold and silver products offered by Swiss America that might best fit your investment needs. Go to Products Introduction ...