EDITOR'S NOTE: It's important to pay attention to what's going on in your portfolio. Beware of rallies. Look at the fundamentals. 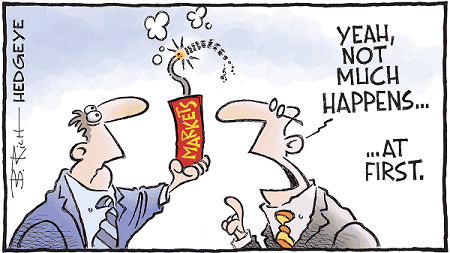 (Bloomberg) -- The US stock rally has already gone too far, and investors face brutal declines if economic growth crumbles in the second half of the year, Bank of America Corp. strategists say.

The “most painful trade” is always the “apocalypse postponed,” a team led by Michael Hartnett wrote in a note. The risk is that inflation flares up again over the next few months, and that the US economy faces a deeper recession in the second half of 2023 after staying resilient in the first six months of the year, they said.

Global equity funds had $44.7 billion of inflows in the past four weeks, according to the note, citing EPFR Global data. Stocks have rallied since the start of 2023 on signs of cooling inflation, optimism over China’s reopening and hopes that slower economies will force global central banks to pause hiking rates.

On Friday, data showed employers in the US added more jobs in January than expected, while the unemployment rate fell to a 53-year low, underscoring the resilience of the labor market despite the Federal Reserve’s most aggressive tightening campaign in a generation. US stock futures extended their slump. READ MORE

EDITOR'S NOTE: It’s happening. Our bankers and our government are looking to take control of digital currency. Good or bad? I say bad.

Another warning shot across the bow just happened…

I warned my readers a few weeks ago about how the Federal Reserve, in cooperation with giant global banks, has launched a 12-week pilot project to test the message systems and payment processes on the new CBDC dollar.

A pilot project is not research and development. That’s already done. The pilot means that what I call “Biden Bucks” are here, and the backers just want to test the plumbing before they roll the system out on the entire population.

That project is due to be completed next month. In other words, Biden Bucks are getting closer to becoming a reality for us all. Now there is another big development to keep you up to speed…

This month, the Digital Dollar Project (DDP) released an updated version of its white paper called “Exploring a U.S. CBDC.”

The project expanded the paper in order to examine central bank digital currency projects internationally, though its focus is still on the United States. Since its original white paper release in 2020, CBDC projects worldwide have increased from 35 to 114.

Here is one statement in the updated paper: READ MORE

We've transitioned from a period of quantitative easing to quantitative tightening; causing serious problems for major corporations. The Fed's tightening to get inflation under control is sending several large corporations straight into BK.

The US has transitioned from more than a decade of quantitative easing to more recent quantitative tightening. QT will remain until the Federal Reserve is finished squashing inflation. However, such a massive paradigm shift in markets might result in a period of deleveraging among highly levered firms that were able to flourish during the QE era.

New Bloomberg data shows large companies (at least $50 million of liabilities) filing for bankruptcy topped 20 this month, the highest in any other January dating back to 2010. Back then, 25 filings were seen as the economy was still reeling from the aftermath of the GFC.

There is no doubt after more than a decade of the Fed unleashing trillions of dollars of credit into the economy via QE, a generation of zombie companies is in the midst of a painful deleveraging event as credit is harder to come by in QT. READ MORE

Central banks continue on their golden buying spree. They have been steadily amassing the yellow metal in the midst of what most everyone would agree are very uncertain financial times. One of the main reasons for their buying: It is an asset that does not have "counterparty risk" - which is why we all should be buying gold right now. 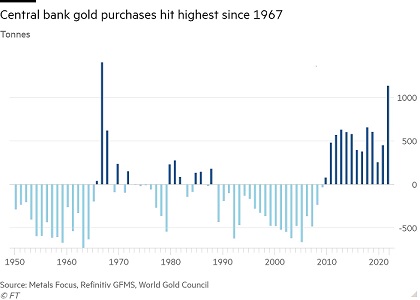 Demand for gold surged to its highest in more than a decade in 2022, fuelled by “colossal” central bank purchases that underscored the safe haven asset’s appeal during times of geopolitical upheaval.

Annual gold demand increased 18 per cent last year to 4,741 tonnes, the largest amount since 2011, driven by a 55-year high in central bank purchases, according to the World Gold Council, an industry-backed group.

Central banks hoovered up gold at a historic rate in the second half of the year, a move many analysts attribute to a desire to diversify reserves away from the dollar after the US froze Russia’s reserves denominated in the currency as part of its sanctions against Moscow. Retail investors also piled into the yellow metal in a bid to protect themselves from high inflation. READ MORE

As many families struggle to maintain their financial households in an era of record-setting price inflation, another factor they're being forced to deal with is borrowing costs not seen since 2007. Sadly, no reprieve is in sight.

Central banks in the US, UK, and the euro zone are widely expected to raise benchmark interest rates to their highest levels since just before the financial crisis 15 years ago.

Investors expect the Federal Reserve to raise rates by 25 basis points on Feb. 1, followed by 50 basis-point increases by the Bank of England and the European Central Bank the next day. This pace marks a slowdown from last year’s aggressive hikes, as inflation cools and unemployment levels remain low.

Fed officials predicted in December that they would lift rates above 5% in 2023, and then keep them elevated through the year. The anticipated hike in February would bring the federal funds target rate to a range of 4.5% to 4.75%. READ MORE

EDITOR'S NOTE: Hedge fund manager Nassim Taleb - who called the 2008 crash - is out with a new warning of impending doom. Several other economists have expressd the same sentiment; are they correct? Read on to see why so many feel a crash is imminent and inevitable.

The market is headed for a 'tinderbox-timebomb' that will be worse than the 1929 crash, Black Swan fund manager says -Business Insider 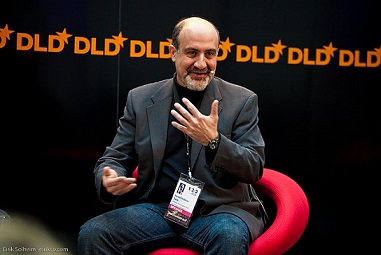 Get ready for a "tinderbox timebomb" that will be even worse than the 1929 stock market crash, the manager of the "The Black Swan" hedge fund warned this week.

Universa Investments is advised by "The Black Swan" author Nassim Taleb, who called the financial crash that spurred the 2008 recession. In a recent letter to its investors, the fund warned the economy was headed for another financial collapse that could mirror the market crash leading to the Great Depression.

"It is objectively the greatest tinderbox-timebomb in financial history – greater than the late 1920s, and likely with similar market consequences," Universa's chief investment officer Mark Spitznagel said in the letter seen by Bloomberg on Tuesday.

Spitznagel has long-predicted the stock market is on a dangerous path to collapse. His bearishness recently has largely been due to the last decade of the Federal Reserve's ultra-low interest rate policy, which flooded markets with liquidity and fueled excessive borrowing. That's created a "credit bubble," Spitznagel said, predicting it would eventually burst and spark a "catastrophic market failure." READ MORE