Will the Brexit Unleash a Global Meltdown?

Great Britain Voted Thursday to Exit the European Union, This “Brexit” Could Unleash Global Chaos...
Or the Start of Worldwide Independence
by Lowell Ponte
JUNE 24, 2016

On June 23, the British people voted in a national referendum to declare their independence from the European Union.

The ruling political establishment, right and left, had joined to crush this populist uprising with a campaign of fear and authority.

But a majority of voters, sick of the European rot that has been destroying the Great in Great Britain, pushed back – and history changed. 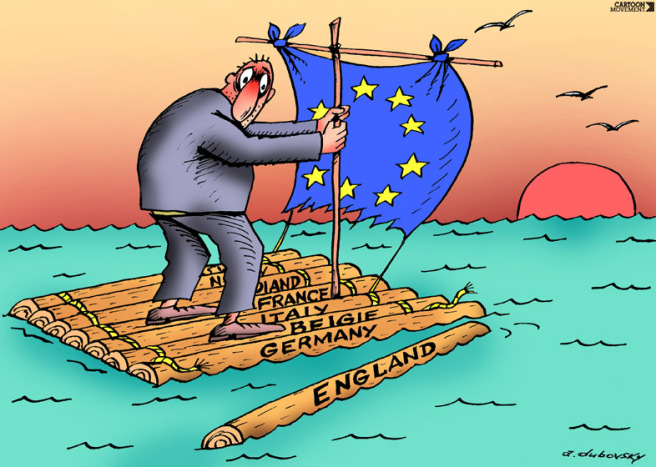 Brexit’s victory unleashed a shock wave around the world that for a time halted stock trading in Asia, sent Dow futures plunging by more than 700 points, drove the 10-year Treasury bond yield to modern record lows, and sent gold surging upwards by more than $80, and at some points, over $100.

Our Fourth of July fireworks now take on new meaning. This is our celebration of declaring and winning Independence from the British Empire.

It has taken 240 years, but the United Kingdom is at last “a nation again,” asserting its freedom from an even larger oppressive empire. We salute them as a fellow free revolutionary people.

In the U.S., this same populist impulse can be seen in the popularity of anti-establishment politician Donald Trump, who backed Brexit.

The presumptive Democratic candidate Hillary Clinton and President Barack Obama urged those in the United Kingdom to submit to the socialist collectivism of the European Union.

We Americans will have our chance to exit such values this November, to renew our own American Revolution.

How did Britain and the world come to this historic transformation?

In the last national British referendum, in 1975, two of every three voters approved their country joining the European Community, a bloc then devoted mostly to trade. But two decades later this creature, now called the European Union, turned political.

In today’s Great Britain, more than 60 percent of its laws and regulations originate not in the Parliament in London but in Brussels, Belgium, from an army of “Eurocrats” and members of the European Parliament. [1]

How would it feel if we were in a binding union with the nations of Latin America, which outvote us and can impose their laws and rules in the United States. Imagine, says one pro-Brexit member of Britain’s Parliament, that a worker from any of these Latino countries has an automatic legal right to move to the United States and, if he fails to find a satisfactory job, is entitled to welfare that American taxpayers are required to pay him.

The EU imposed a $1.5 Billion fine on Poland for refusing to accept vast numbers of Muslim refugees.

Member nations in many ways lose control of their borders, sovereignty, laws and revenues. Nations such as Great Britain that once colonized others are being turned into colonies of the European Union megastate.

Come to think of it, this is close to what President Barack Obama has been imposing on us. No wonder that Mr. Obama recently visited Great Britain and spoke out against Brexit.

But Americans can at least still pretend we are a sovereign nation, not the pawn or serf of a globalist union of foreign nations with the power to replace our laws with their ideology.

And as the Brexit debate brought to light, the European Union has routinely lied to the people and lawmakers of the United Kingdom. The Brits in April learned, for example, that the European Union has secretly been preparing an EU military capable of imposing its will on member countries and potentially preventing them from escaping its imperial grasp. [2]

The force behind this “stealth” EU military is Germany, which attempted a similar “unification” of Europe 75 years ago.

Germany is also behind the new pan-European currency, the Euro, which is its attempt to rule Europe by economic power, to do what it failed to sustain by military power in World Wars I and II. [3]

Our brother Brits who fought so valiantly in alliance with us to win those wars must have felt pain to see their nation being taken over and its sovereignty being erased by a European Union run by Germany.

Britain’s exit from the European Union was opposed by Conservative Party Prime Minister David Cameron through a barrage of scare tactics. Among these claims: Brexit will cost every British family thousands of pounds by denying Britain access to European markets, that it will cause economic chaos, and that Britain returning to its independent sovereign status of 45 years ago might even lead to “the end of Western Civilization.”

Cameron and others are serving business interests that have enriched themselves via European Union trade with Europe. But more than 40 pro-Brexit Tory members of Parliament oppose ousting Cameron, in part to deal with Scotland and Northern Ireland, and in part because Cameron kept his promise to call such a referendum. Despite this, Cameron announced that he will leave office by October.

Despite a vote of the United Kingdom’s people to leave the EU, this process under EU rules will take at least two years of negotiation and making new trade and other arrangements

Opponents of the Brexit rightly fear that England’s vote to leave will encourage voters in many other places to demand their right to vote for secession. On Friday, French populist leader Marine LePen called for such a national referendum in her country. This could begin the unraveling of collectivist Europe.

(Few countries are rushing to join the European Union, with its crushing regulations and other high costs of membership. Days before the June 23 referendum, Switzerland withdrew its application to join the EU.)

Around Europe are dozens of secession movements. Many Venetians want to become a nation independent of Italy. A likely majority of Catalans around Barcelona want independence from Spain.

The successful Brexit vote will fuel many such movements around the world.

Donald Trump is not a secessionist, but his anti-establishment populist rhetoric is part of a global phenomenon whose activists are winning votes in France, Germany, Italy and many other countries. People are simply fed up with old-line oppressive political leaders.

“The world has decided the old status quo is not acceptable,” says monetary expert Craig R. Smith. “People want to be heard, and they are tired of politicians, crony capitalism and big business elites calling the shots.”

In North America, independent socialist Senator Bernie Sanders of Vermont has led a surprisingly successful rebellion to move the Democratic Party even farther leftward. And a movement in Vermont continues to call for separating from the United States – and perhaps becoming a province of Canada. Many in Quebec, meanwhile, still want to separate from the rest of Canada.

And in the United States, independence movements in Alaska and Texas [4] want their own Brexit-like referendums.

Historically, politics around the world involve forcing things together under bigger governments, or forcing them apart into smaller nations. The British people’s Declaration of Independence vote will help roll back the globalist government direction of the European Union and similar Progressive collectivist entities.

A vote against Brexit could have made Britain’s decline permanent, because the people would never again have been allowed to regain their freedom with a ballot.

“Government regulators and central banks such as the Federal Reserve might ‘step in,’ in the wake of the Brexit vote, to manipulate markets and protect the old order,” says Smith. “They did this in 2008 and created the longest recession in American history.”

“They should let the free market work without political interference to restore genuine health and growth to our economy.”

“The world wants change,” says Smith, “that will bring back freedom, personal responsibility and individualism; and will end collectivism. People are hungry to return to small government, free markets and honest money.”

“British voters have taken a brave and noble step to push back against those who are trying to turn our nations into conquered provinces of their socialist empires.”

For an amazing interview with Lowell Ponte about the British referendum and secession movements here and in Europe, contact: Sandy Frazier at sandy@mystic-art.com or call 516-735-5468

For a media copy of Lowell’s latest book, We Have Seen the Future and It Looks Like Baltimore: American Dream vs. Progressive Dream, co-authored with monetary expert Craig R. Smith, contact Bronwin Barilla at 800-950-2428.

[3] Craig R. Smith and Lowell Ponte, We Have Seen the Future and It Looks Like Baltimore: American Dream vs. Progressive Dream. Phoenix: P2 Publishing, 2015. Pages 193-194; Professor Alan Sked, “How a Secretive Elite Created the EU to Build a World Government,” London Telegraph, November 27, 2015. URL: http://www.telegraph.co.uk/news/newstopics/eureferendum/12018877/The-truth-how-a-secretive-elite-created-the-EU-to-build-a-world-government.html ; Christopher Booker, “The EU’s Architects Never Meant It to Be a Democracy: The Rise of a ‘Technocracy’ Was Always Part of the Plan for Europe,” London Telegraph, November 12, 2011. URL: http://www.telegraph.co.uk/comment/columnists/christopherbooker/8886498/The-EUs-architects-never-meant-it-to-be-a-democracy.html

[4] Craig R. Smith and Lowell Ponte, We Have Seen the Future and It Looks Like Baltimore: American Dream vs. Progressive Dream. Phoenix: P2 Publishing, 2015. Pages 146-147; Tom Dart, “’Why not Texit?’: Texas Nationalists Look to the Brexit Vote for Inspiration,” The Guardian (UK), June 19, 2016. URL: https://www.theguardian.com/us-news/2016/jun/19/texas-secession-movement-brexit-eu-referendum