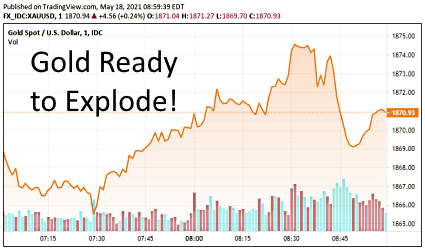 For those who adhere to the investment adage, “Buy Low, Sell High,” the Biden administration appears to be serving up a rare opportunity to buy gold and silver when precious metal prices are down from previous year highs and positioned for an historic advance.

In addition to the $1.9 trillion coronavirus relief package President Biden signed into law on March 11, 2021, the Biden administration has before Congress an ambitious “Build Back Better” plan. This plan begins with $2.25 trillion spent on the American Jobs Plan, billed as an “infrastructure” program, despite the emphasis on energy initiatives including funding much of the Green New Deal. The second part of Biden’s plan to “Build Back Better” includes a $1.8 trillion American Families Plan that would provide transfer payments including free kindergarten programs, free attendance at two-year community colleges, and child-care support.

Despite the Biden administration’s desire to offset more than $4 trillion in spending proposals with higher taxes, the fact remains that the United States reported a record $738 billion budget deficit in April 2021; a result of an explosion in government spending amid shrinking federal revenue resulting from the yet-continuing Covid-19 economic lockdown. The previous record budget deficit for any month was $235 billion in February 2020.

The prospect of increasing federal revenue is not likely anytime soon, especially given that the U.S. Bureau of Labor Statistics reported that only 266,000 new jobs were created in April 2021, despite headline predictions anticipating a “jobs boom” creating 1 million or more jobs that month. All this is occurring while Warren Buffet, the investment guru behind Berkshire Hathaway, warns that we are seeing “very substantial inflation” in the homebuilding market as the prices of lumber and other construction materials begin to skyrocket.

Despite the Biden administration’s promise that this unprecedented federal spending will be “revenue neutral,” the administration plans to propose Congress should increase taxes, including nearly doubling the rate to 43.3 percent. Wall Street responds negatively at every suggestion of federal fiscal restraint. One day after the Federal Reserve suggested interest rates may have to rise to restrain inflationary pressures, U.S. Treasury Secretary Janet Yellen, a former Federal Reserve head, went public insisting she sees “no inflation problem brewing,” quashing any suggestion even modest increases in interest rates are likely in the near future.

Meanwhile, the public debt of the United States continues to soar, reaching a record total of $28.17 trillion, nearly tripling from the $10.6 trillion national debt in January 2009; the month Barack Obama was first inaugurated president. While Republicans as well as Democrats bear responsibility for the historic growth of the national debt fueled by constant demands to increase federal spending, Democratic Party economists have embraced Modern Monetary Theory, or MMT. This new economic paradigm embraces the postulate the federal government can and should print fiat currency to deficit spend. Why? Because the federal government can simply print more fiat currency to pay interest due on the debt, regardless how large the federal debt may grow to be.

With growing federal deficits and employment numbers coming out of the coronavirus remaining weak, the dollar sell-off has begun to push gold back over $1,800/ounce. While nobody has a crystal ball, the dollar continues to decline in foreign exchange markets, as the underlying economic fundamentals remain strong for gold and silver. Buying metals now, while prices remain yet depressed, has the advantage not only of locking in potential near-term gains, but also lowers the average cost per unit of gold and silver bought at 2020 gold and silver price highs.

With MMT, the Democratic Party-controlled White House and Congress have ventured into a brave new world rushing forward under the green light liberal economists have given to the federal government’s never-ending printing of fiat currency. Yet, savvy investors have always understood that gold and silver are money, unlike the paper in our wallets that has no intrinsic value. Savvy investors have historical reasons to worry that economic theories like MMT may be the prelude to devastating hyper-inflation in the near future.

2021 appears to be one of those rare opportunity when buying gold and silver now - at current lows - while waiting for MMT to crash and burn, may be the most prudent investment a savvy investor has ever had the opportunity to make. Take the first step now and request a free copy of Swiss America’s 2021 Gold Report by calling 800-289-2646 or visit online at swissamerica.com/Lee.

Jerome R. Corsi, Ph.D., is the co-founder of Corstet.com, a website devoted to economic analysis that includes a specialty in gold and silver investing and annuity marketing as well as telemedicine. Since 2004, Dr. Corsi has published 25 books on economics, history, and politics, including two #1 New York Times bestsellers. In 1972, he received his Ph.D. from the Department of Government at Harvard University. He currently resides in New Jersey with his family.