EDITOR'S NOTE: BlackRock is warning of the misjudgments the market is making in regard to underlying risks. Many experts agree that central banks have no near term solution for any of the problems currently plaguing Wall Street and this will cause continued investment portfolio declines; unless funds are invested and diversified properly. We agree. With faltering markets and continuing inflation, we believe diversification is vital as we move into 2023. 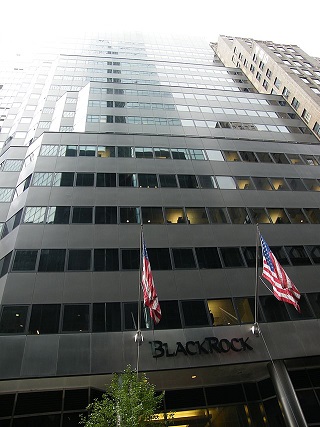 BlackRock says the market is misjudging these key risks. Here’s its advice on stocks and bonds. -MarketWatch

Wall Street is on a five-day losing streak. The decline, -0.19%, 3.6% as measured by the S&P 500 SPX, isn’t that big, but it seems depressingly inevitable once the benchmark fails to stay above its 200-day moving average again.

The recurrence of each rally in 2022 is a recognition that stocks’ relationship with central banks has changed. Once supportive, his fight against inflation has put pressure on equities and made markets more volatile.

Our call of the day is from BlackRock BLK, -0.16% , who say this challenging macroeconomic landscape will continue and that investors will need a new three-pronged strategy to navigate it.

“The new macro regime is playing out. We think this requires a new, dynamic playbook based on market risk appetite and pricing of macro damages,” says BlackRock’s investment institute team led by Jean Boivin.

First, let’s quickly settle that, unlike more optimistic Federal Reserve observers, BlackRock doesn’t believe the US central bank will be providing much aid to investors any time soon. READ MORE

The crackdown on crypto begins in earnest. If Elizabeth Warren gets her way, the governing controls will be handed over to the SEC. Is this really the best entity for the job? Given the financial fallout experienced on Wall Street over the last several years, it would seem the SEC already has a full plate; but who else could be tasked with this responsibility? It is for this reason most experts have always warned "caveat emptor" when buying crypto, which still seems to be the most sound advice.

Sen. Elizabeth Warren, D-Mass. is working on a sweeping cryptocurrency bill that would hand the Securities and Exchange Commission most regulatory authority over the market, according to two people familiar with her efforts.

While discussions are still early and details could change, Warren’s office is looking at a range of crypto-related issues, including regulations, taxation, climate, and national security. The senator has recently stepped up her criticism for the industry and demanded “comprehensive” new rules to govern it following the massive collapse of the crypto exchange FTX. (FTX founder Sam-Bankman Fried is an investor in Semafor.)

Ideas on the table in Warren’s talks also include ensuring broker-dealers and crypto exchanges comply with certain regulatory obligations like providing audited financial statements, and imposing bank-like capital requirements so they’re able to withstand financial shocks, the people said. Another is barring the commingling of customer assets so a company can’t use customer deposits to finance other investments, and securing them so customers are first in line to get their money back in the event of bankruptcy. It could also further expand tax reporting requirements beyond new rules lawmakers enacted last year. READ MORE

In other news, we're learning that the surge in US Government debt isn't being done externally (by other countries), but rather internally (by US citizens and entities). The risk we run in this situation is that if there is an actual bursting of the debt bubble, it will create a widespread domestic implosion as well as a huge ripple effect felt across the globe. 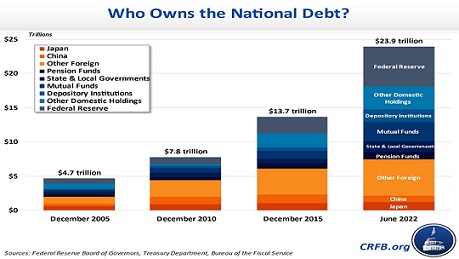 US treasury holdings by China and Japan have been falling.

The explosion in U.S. government borrowing over the last 15 years has been fueled not by lending from China and Japan but through the purchase of treasuries by U.S. financial institutions, state governments and other domestic entities.

In late 2010, shortly after the housing crisis, federal debt owned by the public totaled $7.8 trillion, and close to two-thirds of that represented lending from Japan, China and other foreign nations. By the summer of 2022, total debt owned by the public more than tripled to $23.9 trillion – a jump of $16 trillion that was mostly financed by U.S. banks, mutual and pension funds, state and local governments and other domestic entities, according to federal data analyzed by the Committee for a Responsible Federal Budget (CRFB). READ MORE

Wall Street chorus grows louder warning that 2023 will be ugly

As 2022 comes to a close, more experts have less than rosy predictions on where the stock market is headed in 2023. After a year of constant finger crossing and breath holding for some, it is looking like we're heading for some rough markets ahead. Yet another reason to be as balanced and diversified as possible with our retirement and investment funds.

In the Federal Reserve’s quiet period before its officials meet to decide their final actions this year, Wall Street watchers are filling the void, loudly warning that next year’s outlook for the US economy and stocks is grim.

From Goldman Sachs Group Inc.’s David Solomon caution that the economy faces “bumpy times ahead,” to JPMorgan Chase & Co.’s Jamie Dimon grimmer view that this would be a “mild to hard recession,” and Morgan Stanley Wealth Management’s Lisa Shalett, who told Bloomberg Television that corporations are facing a “rude awakening” on earnings, the messages have become increasingly dire.

“We do not think the economic conditions for a sustained upturn are yet in place,” Mark Haefele, chief investment officer at UBS Global Wealth Management, wrote in a note. “Growth is slowing and central banks are still raising rates.”

Investors appear to be heeding the warnings. Following a two-month rally, the S&P 500 Index has fallen in all but one of the last eight sessions and dropped 1.4% on Tuesday. READ MORE

EDITOR'S NOTE: Some good news to brighten your holiday season ... there is a strong chance silver prices may experience a nice run up in 2023. This is due in part to severe supply shortages -the greatest we've seen in decades. What lends strength to this prediction is well-rounded global demand, which experts are suggesting is just now starting to heat up. 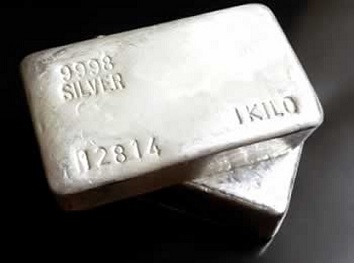 LONDON, Nov 18 (Reuters) - Global demand for silver is expected to rise 16% this year to 1.21 billion ounces, creating the biggest deficit in decades, according to the Silver Institute on Thursday night.

Use of silver by industry, for jewellery and silverware and for bars and coins for retail investors were all forecast to reach record levels, the institute said.

Automakers are using more silver as the amount of electronics in vehicles increases, but the sector accounts for only around 5% of total demand. Solar panels account for around 10% of silver demand. READ MORE

EDITOR'S NOTE: Like it or not, the day of digital, government-controlled dollars may be here soon. States are gearing up for what could be the next chapter in the world of currency, what it looks like and how we spend it. There is already talk about regulating what people buy to ensure it "mitigates climate change" and "promotes financial inclusion". We may soon be on the same social credit system as China. Read on to find out how this will affect your day-to-day spending but most of all your privacy and freedom. Alternatives are out there. Seek them out now before prices are out of reach.

Will Your State Reject The Fed's Digital Dollar? - ZeroHedge 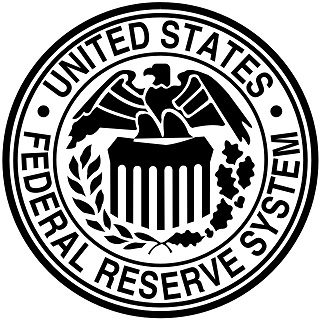 Authored by MN Gordon via EconomicPrism.com

Personal and political freedoms are inseparable from economic freedom. To this end, economic freedom is contingent upon an economy that transacts using honest money that’s free from coercion.

Volumes have been written on America’s experience with money of varying veracity. Here we’ll touch on a few key events.

Article I, Section 8, of the U.S. Constitution empowers Congress to coin money and regulate its value thereof. Article I, Section 10, specifies that no state shall make anything but gold and silver coin a tender in payments of debts.

In this regard, the current U.S. dollar, a Federal Reserve Note, is illegal money. It is issued by the Federal Reserve – not Congress – in direct violation of the U.S. Constitution. Moreover, when states collect tax dollars that are devoid of gold or silver coin, they violate the Constitution.

Economic freedom has been greatly undermined by Washington over the years. Executive Order 6102 of 1933, for example, forced all American citizens to turn in gold coins and bars. Gold ownership in the United States, with some small limitations, was illegal for the next 40 years.

Economic freedom was again undermined when President Nixon “temporarily” suspended the convertibility of the dollar into gold in 1971. This action removed any remaining protection workers and savers had against their hard-earned dollars being inflated away.

But now, as the year 2022 nears its close, another extremely destructive event approaches…READ MORE