Gold: An Unchangeable Asset For A Changing World

A lot has changed in the world of politics and economics in the 21st century. Who could have imagined that a sitting U.S. president would suggest that our nation start manipulating our currency to stay competitive with the other nations the world?

The truth is: currency manipulation is what our central bank (The Federal Reserve) has been consistently doing for over a century!

The U.S. dollar (and the U.S. citizenry) has lost 98% of its buying power since the Fed starting fiddling with interest rates and the dollar back in 1913. This debasing of the U.S dollar helps explain why the so-called "wealth gap" has been widening in our nation for so long and why most workers’ incomes are not able to keep pace with the rising cost of living.

The solution is not more currency manipulation, but less. And to protect your dollar savings by converting a substantial portion of your declining dollars into an asset which has stood the test of time over many millennia - physical gold.

"Time is the coin of your life," said the famous American poet Carl Sandburg, "It is the only coin you have, and only you can determine how it will be spent."

Because your savings and investments represent your time and your life, you need to be careful to save and invest wisely. For most people this means doing our best to practice thrift by saving as much as we can to help offset the erosion of the dollar's buying power and by owning some real estate, stocks, bonds and a retirement savings plan.

The goal for millions of baby boomers like me is to achieve peace of mind in our latter years, as well as being in a position to help our children and grandchildren successfully navigate today's rapidly changing world with minimal financial pressures.

In 2019 we are well into a brave new high-speed, tech-driven 21st century, so it seems wise to pause for a moment and reflect on how our life plan is progressing and to review our financial scorecard to see if we are on track, or if perhaps we may need to modify our course.

To help, here is a short overview of the average increase in the cost of living and how it has affected our incomes, average automobile prices, home prices, stock prices and gold prices between 1999 and 2019. 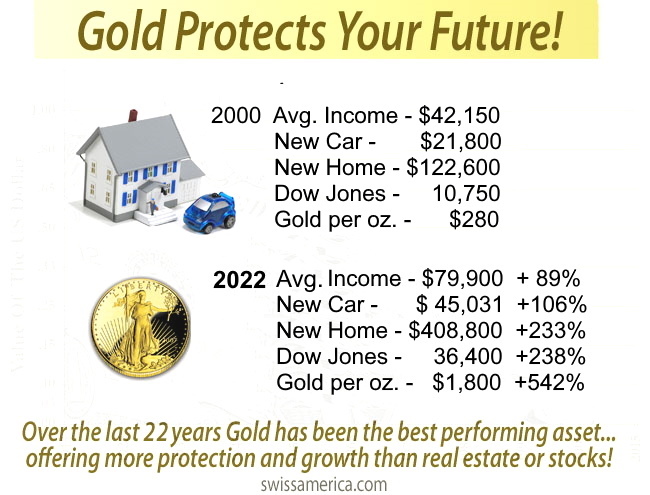 What stands out to me most is that while our government assures us that consumer price inflation is "under control" at about 2%, our incomes are just barely keeping pace, rising an average of 2.15% per year over the last 20 years. Meanwhile, automobile prices have risen over double (5.5%). No wonder people are driving their cars longer.

Americans typically feel quite confident that their homes and real estate represents one of the best ways to build wealth over the long-term, yet on average home prices are up just 3.6% since 2000. Some argue that U.S. home prices have entered another "bubble" like they did in 2006 and prices could fall dramatically in the next recession.

Wall Street and Washington unceasingly tells us that owning stocks is the very best game in town to build our wealth - pointing almost daily to "historic highs" of stock market indexes as proof of America's financial greatness. Yet market volatility is also rising and experts warn that the so-called "tech boom" is looking rather long in the tooth.

Yes, it’s true that stocks prices have far outpaced consumer inflation over the last 20 years - with an average gain of 6.6% per year - however, keep in mind that stock prices have been artificially inflated by corporate stock buy-backs and Fed manipulation of interest rates to near-zero for the last decade; which has forced millions of Americans into buying stocks in an effort to get any return at all.

Lastly, notice the price of an ounce of gold has quietly outperformed every other major asset class by a wide margin - increasing from $285/oz. in 1999 to over $1,400/oz today. It should be no surprise why Wall Street and the mass media so often shun recommending gold - because it usually tells the economic truth.

Can you see why owning physical gold over the last two decades has been so vital to maintaining your buying power? The price of gold is one of the only true indicators of economic reality in a world so full of fake political and economic news. Gold has proven itself over and over as an unchangeable asset for a rapidly changing world.

Own gold first for wealth preservation and secondly for its amazing growth and profit potential.

Learn more about the Timeless Truth About Gold by calling Swiss America at 800-289-2646 before the next major move sends gold prices rocketing to unimaginable levels as today's highly manipulated financial house of cards and fiat currencies comes crashing down.