This year, 2019, marks the 100th birthday of the Weimar Republic taking over post-World War I Germany.

Weimar, dominated by the socialist Social Democratic Party (SPD), was a sharp left turn in German politics. We face the same today in the United States, where socialists recently seized control of the Democratic Party. Our future elections will be Russian roulette, a choice between pro- and anti-capitalist parties.

Weimar debased German culture. Traditional conservative morality and ethics were replaced by decadence. Hard-working thrifty people lost everything, while speculators and borrowers got rich by repaying debts with worthless money. The 1972 movie Cabaret depicts this and the socialist dictatorship it spawned. Today’s America faces a similar cultural breakdown.

Weimar was a government that paid its bills by printing limitless paper fiat money out of thin air. This at first created the illusion of prosperity, fake wealth intoxication. The socialist rulers then printed “too much” money, and suddenly, as we describe in Crashing the Dollar: How to Survive a Global Currency Collapse, hyperinflation exploded. 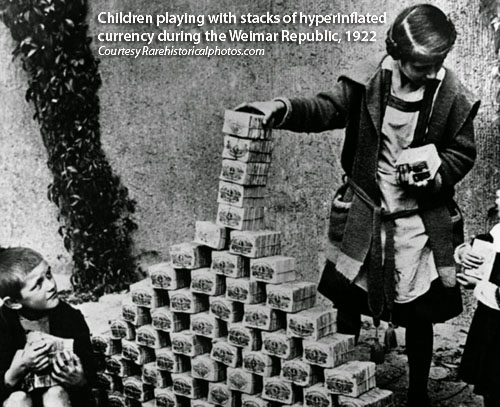 The U.S. Dollar was worth 4.2 German Marks when WWI began, but by 1923 it took 4.2 Trillion Marks to buy a single dollar. In 1913, total currency in Germany was just 6 Billion Marks; in November 1923, one loaf of bread cost 428 Billion Marks, and a kilogram of butter almost 6,000 Billion Marks. From the end of WWI until 1924, the price level rose almost one trillionfold.

Money was evaporating. Workers were paid twice every payday – usually with a wheelbarrow of paper Marks – because currency was losing value by the hour. This was the Dying of Money: Lessons of the Great German and American Inflations, as historian Jens O. Parsson documents. Money, no longer a reliable store of value, died.

In 1914, Germany ended its gold standard that restricted government spending so that it could fund with credit a war it expected to win in weeks. World War I lasted five years, dragging Deutschland deep into debt. Germany lost and was forced also to pay crushing reparations that continued until 2010.

In late December, 1913, the United States launched the Federal Reserve, purportedly to defend the dollar’s value but actually to create an “elastic currency” with which spendaholic Progressive politicians could cheaply expand government. The Fed immediately reduced the gold standard to backing only 40 percent of paper dollars, and Presidents Franklin Delano Roosevelt and Richard Nixon later terminated the gold standard.

Today the paper fiat dollar is worth less than two pennies of the 1913 gold-backed dollar. Reckless spending has put the U.S. in a hole of total debt – more than $1.5 Quadrillion Dollars – that can never be honestly paid, but only “monetized” by printing endless paper fiat dollars that will hit a tipping point of untrustworthiness and suddenly trigger hyperinflation like Weimar’s.

Many of the socialist Democratic Party’s leading 2020 presidential candidates are promising new giveaways that will cost more than $100 Trillion. Senator Elizabeth Warren (D-Massachusetts) has also pledged to raise income taxes to at least 70 percent and impose a new “wealth” tax. Warren would require major companies to have a “charter” that lets politicians force them to give billions to radical social activists – just as Democrats earlier forced banks to give home mortgages to unqualified borrowers…which led to the 2008-2009 near-collapse of the economy.

Warren claims to support capitalism – not of the free market laissez-faire kind, but dirigisme (from the French word “to direct”) in which politicians dictate private company policies for the collectivist “public good.”

She also wants “economic patriotism” – to shove Fed bankers aside and “actively manage the dollar,” deciding by partisan politics how much paper money gets printed.

We are already halfway to the economics of Oz. Democrats embrace Modern Monetary Theory (the “Magic Money Tree,” economists call it), which holds that a country can print and spend its own currency almost without limit.

Today the market gives billion-dollar valuations to stocks of companies like Uber that earn no profits, yet are rich from untaxable bank loans that charge zero or less-than-zero percent.

Weimar hyperinflation’s rebirth will soon come to America. Your family can escape it by converting a share of your paper dollars, and assets denominated in dollars such as stocks and bonds, into something that has been a reliable store of value for thousands of years – gold.

Discover The Timeless Truth About Gold and Silver today! Call Swiss America at 800-289-2646 or visit www.swissamerica.com/TTAM for a complimentary report and DVD.