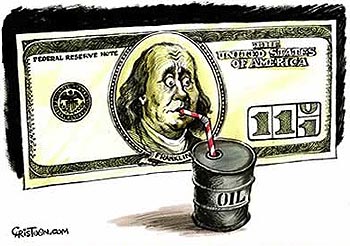 President Donald Trump was greeted and treated like a wise and welcome world leader and ally in Saudi Arabia. But the media said almost nothing of the secret connections that for 46 years have kept our two nations linked in a special, mutually-dependent relationship.

In 1944 the United States, the superpower to emerge after World War II, created a new economic system, the Bretton Woods agreement. The U.S. Dollar’s value would be pegged to gold, and other Western nations would peg their value to the dollar.

After working well for decades, Bretton Woods was burned down by President Richard Nixon. After printing billions to fight the Vietnam War, he announced in August 1971 that the U.S. would no longer redeem dollars for gold. Without its gold anchor, the dollar tried to float but its value promptly sank by a third.

The Organization of Petroleum Exporting Countries (OPEC), including Saudi Arabia, soon staged an oil embargo – not because we helped Israel win the 1973 war, but because OPEC wanted to regain the value for its oil lost when the dollar was debased.

Nixon then “negotiated an agreement with Saudi Arabia that the Muslim nation would sell its oil only in exchange for U.S. Dollars,” as we explain in our latest book, Money, Morality & The Machine.

“This shored up the dollar’s status as the global reserve currency, a tremendous boon to us because we exclusively manufacture legal U.S. Dollars,” we write.

Our global economic dominance – with at least 40 percent of world trade in dollars – was made possible by the Saudi special relationship.

What the Saudis got was American military protection and the opportunity to purchase some of the world’s most advanced weapons. This “petrodollar” symbiosis has made Saudi Arabia the biggest purchaser of our weapons and one of the biggest buyers of our ever-growing debt.

This was again on display during President Trump’s visit as American corporate leaders were on hand along with weapon sales of at least $110 Billion and total sales from U.S. companies that could top $350 Billion over the next ten years as the Saudis diversify away from oil.

Saudis might see this as particularly important in the wake of eight years of President Barack Obama tilting toward Iran and helping this rival power to acquire nuclear weapons. Iran, a leading sponsor of global terrorism, has been busy building a “Shiite crescent” around the Saudis, from Yemen to Syria and Lebanon. Iraq under Saddam Hussein won a war against Iran, but in the wake of our removing him and of Barack Hussein Obama withdrawing American troops, Iraq is now effectively controlled by more than 100,000 “allied” Iranian troops who show no sign of ever leaving.

Saudi money and political donations, we write, “have altered American politics and caused our government to bend and bow increasingly toward Mecca and Riyadh.”

Americans are the Janissaries who with our blood defend Saudi Arabia, which funds Madrassas, schools worldwide that “teach of the coming world conquest by Islam by fire and sword. Will this prove to be the worst of those ‘entangling alliances’ that our Framers warned against?”

President Trump, to his credit, is enlisting Saudi and other Muslim help to fight the war against terrorism. But the Saudi connection also reminds us how vulnerable our paper dollar is – and why as individuals we need to diversify our savings to include the enduring, reliable value of gold.

To schedule a fascinating interview with Craig R. Smith – a monetary expert and executive frequently interviewed on Fox Business and other business media – and Lowell Ponte – a veteran think tank futurist and former Roving Editor of Reader’s Digest who has done reporting from the Muslim Middle East and Israel– contact: Sandy Frazier at 516-735-5468 or email sandy@mystic-art.com.