Today a growing number of highly respected business leaders, such as Bill Gates and BlackRock CEO Larry Fink, are recommending urgent preparation for a major drop in the U.S. stock indexes. In March, Bank of America analysts warned that 13 of 19 Bear Market indicators for stocks have now been triggered.

CNBC reports, “J.P. Morgan co-president Daniel Pinto believes equity markets could see as much as a 40 percent correction within the next few years.” 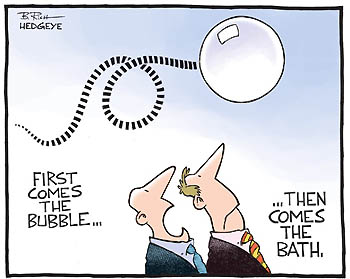 The list of reasons why today’s overvalued, overbought and over-bullish stock market bubble is on the verge of bursting is almost endless.

Prior to the 1970s, America was the world's leader in exports and trade surpluses. What changed the equation? A monumentally bad decision by President Richard Nixon to abandon The Gold Standard in 1971. The decoupling of the dollar and gold began a vicious cycle of inflation, crushing the dollar's value and sending U.S. manufacturing and jobs overseas.

Agora Financial founder Bill Bonner writes, "Raising borrowing costs is bound to set off the next recession/crash...as soon as investors realize that Fed Chairman Powell is sneaking up on the bubble with a pin in his hands."

Mr. Bonner continues, "Every major stock market decline and every recession in the last 100 years was preceded by the Federal Reserve raising short-term interest rates by enough to provide the pin to prick the balloon. In a correction, the only way to stop stock prices from falling and the economy from shrinking is to bring in more debt."

U.S. debt has been growing between three to six times faster than income over the last 20 years. The problem is, there's no way to grow your way out of debt when your income is falling and your debt is rising. Like the old saying goes,“When your outgo exceeds your income, your upkeep becomes your downfall.”

US credit card debt topped $1 trillion at the end of 2017 and "42% of Americans are at risk of retiring broke," reports CNBC, and have less than $10,000 saved for retirement. Bottom line: debt matters.

Third, rising interest rates may also become the pin which pops the new housing price bubble, which has already sent prices in many U.S. major cities far above 2006 “bubble” levels. Today wages are not keeping up with rising home prices, causing many families to opt for renting instead of buying a home.

How would a broad market crash affect your financial future and retirement plans? In a world full of so many pins, where can you find refuge, safety and growth potential for your savings?

One of the few asset classes which has shown amazing stability during the rising volatility in 2018 is precious metals. For thousands of years gold has served a trusted safe haven. Wise money embraces a personal gold standard, even when governments foolishly abandon it. Today gold represents the opposite of a market bubble; true value.

“Gold as a portfolio hedge and as hedge in terms of signs of stress is doing exactly as advertised. It's delivering that diversification benefit,” Tushar Yadava, investment strategist for U.S. iShares at BlackRock, told Associated Press.

Get the full story in our new FREE Special Report, The Crashless Society.