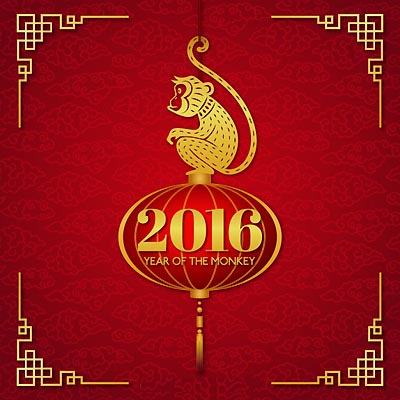 Chinese astrologers warn that 2016 will be a year of competition and challenge, youthful energy and fun, curiosity and creativity, intelligence and trickery, like monkeys themselves.

This Year of the Red Fire Monkey is auspicious for bold new enterprises, say Chinese soothsayers. Those who take daring entrepreneurial risks this year are more likely to succeed – and old political and business empires to fall.

We may not believe in Chinese astrology, but more than a billion people in Asia are influenced by it. This year's astrologically-predicted likelihood of success through risk-taking could become a self-fulfilling prophecy that influences the global economy and world politics.

Presidents Harry Truman and Lyndon B. Johnson were born in Monkey years, as were Eleanor Roosevelt, Leonardo da Vinci, and Annie Oakley.

Monkey years have produced tricky and slick victorious politicians as well as one of America's best known straight shooters. Do not be surprised if one or more presidential candidates at times looks a bit like a monkey or ape.

This, say Chinese astrologers, is a good year for optimism about individual – but not necessarily group – achievement in business, so long as investors and inventors focus on facts and prudence. For society, 2016 will be a year of insecurity.

“Group movements, such as political upheaval or revolutions, will not make a mark during this year” of the Monkey, wrote one Chinese fortuneteller.

China has been hedging its bets by increasing its already-rapid rate of gold purchases. We are already in global currency wars, trying to win a "race to debase" the dollar to make our exports cheaper and more competitive in foreign markets.

China has entered these currency wars and in 2015 saw its Yuan currency given higher status by the International Monetary Fund (IMF).

China is already striking bargains with several other nations to trade directly via the Yuan rather than the more widely exchanged U.S. Dollar, the global reserve currency.

Saudi Arabia has demanded that all purchases of its oil be made in U.S. dollars. This Saudi policy, after Richard Nixon in 1971 severed the dollar's last link to a gold standard, has given American currency a kind of implicit anchor in oil that has made the dollar more valuable and enhanced our power as controllers of this global reserve currency.

The Chinese, who invented both paper and paper money, understand this. They are an ancient culture. They see us debasing the U.S. Dollar into "ghost money."

China has been increasing its imports of gold. Some experts suspect that this is because China, despite its recent economic problems, is considering whether to issue its own gold-backed currency to compete with the dollar.

This Year of the Monkey in Chinese astrology is a metal sign connected to gold. 2016 might be a prudently lucky year to diversify and balance your investment portfolio with gold to hedge against what politicians here and abroad are doing to devalue our paper currency.