Progressives Killing The American Dream
Book reveals keys to winning the battle for the future of the U.S. 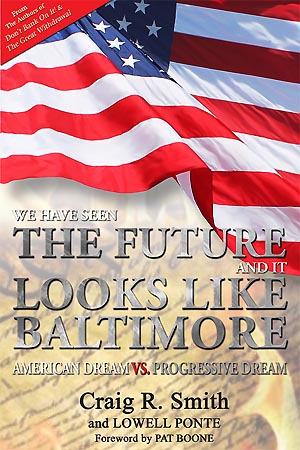 In WE HAVE SEEN THE FUTURE AND IT LOOKS LIKE BALTIMORE monetary expert Craig R. Smith and futurist Lowell Ponte explore the sinister origins and roots of Progressivism - an un-American, anti-individualism and pro-collectivism, anti-free market and pro-socialist ideology - that shares common ideological ancestry with both Nazism and Communism.

Authors Smith and Ponte detail how Progressivism is systematically killing the American Dream by undermining four of its cornerstones – 1) honoring property rights, 2) doing better than our parents via education, 3) working to earn our own way, and 4) achieving an independent, earned and secure retirement.

They also reveal how Progressives like former President Barack Obama have helped to rush America into a cashless, un-capitalist new economic system.

Craig and Lowell show how Progressives also hijacked the Democratic Party and, through anti-business taxes and regulations, are ruining the American economy through “Donkey Drag;” the fear of expropriation that businesses now feel about investing and hiring more workers.

The mere existence of a major Progressive Party threatens, damages and weakens America’s free market economy and future. The more it wins, the more our whole nation will resemble the bad aspects of Baltimore.

In this, their sixth book, the authors show how readers can help protect themselves and their savings – and some things we can do to help the American Dream win this battle.

Craig and Lowell also reveal Baltimore’s little-noticed seeds of greatness that could restore the American Dream.

In this special offer you can receive a FREE COPY e-version of WE HAVE SEEN THE FUTURE AND IT LOOKS LIKE BALTIMORE: American Dream Vs. Progressive Dream by calling 800-289-2646 or registering online.