A Monumental Assault Upon America's Heritage! 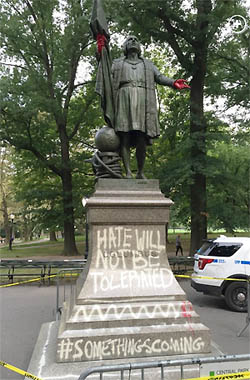 For more than a century, far-left progressives have carried out a slow-motion demolition of America’s founding values.

In recent years, these misguided radicals have sought to condemn America's Founding Fathers and tear down our community's historic statues.

You may have seen news accounts of Christopher Columbus statues and monuments around the United States being defaced, torn down or removed from public exhibition.

If this trends continue, Christopher Columbus's historical significance could be eradicated from public schools as well.

Swiss America wants to help Americans preserve our precious history by owning U.S. gold and silver coin artifacts. An excellent way to show your support is by purchasing a modestly-priced Columbus half dollar coin minted of 90% pure silver, as a precious family keepsake. 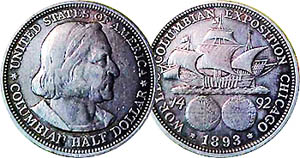 The Columbus half dollar was the first U.S. commemorative coin ever minted depicting a historical figure. These small artistic mini-statues convey real U.S. history and honest value in precious metal.

Minted over a century ago in 1892-93, the Columbus half dollar commemorates the 400-year anniversary of the discovery of America and features a portrait of Columbus and a view of his ship, the Santa Maria, with the date 1492 on the reverse.

Preserve United States history for the future generations of your family! Call Swiss America today at 800-289-2646 to order your beautiful Columbus half dollar.

PLEASE NOTE: Must have valid phone number to process order.

PRIVACY STATEMENT: We provide our clients with the highest quality of service and privacy at all times. All information is kept strictly confidential and is never sold or exchanged with any other entity.