Will China Win the Economic War with the U.S.?

Will China Win the Economic War with the U.S.?

In 1972 the United States took a big gamble. We bet we could turn communist China into a capitalist nation before they used the wealth we gave them to destroy us. Almost a half century later, China has turned into a monster. 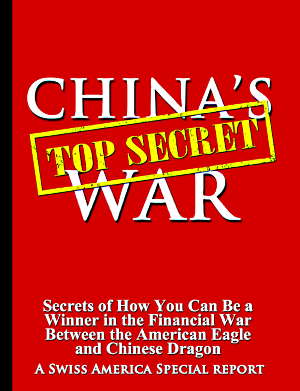 Since 2001, America has gotten hooked on China's cheap products, easy borrowing, and opiate war - which now kills as many Americans each year as died during the entire Vietnam War.

Meanwhile, America has lost tens of millions of jobs, thousands of factories and one of our two political parties has became increasingly anti-capitalist. Where will it all end?

Today China is waging deceptive economic warfare against us, and your savings and investments are now at risk.

To help you be a winner who survives and thrives during this economic war, you need to read Swiss America's brand new FREE Special Report; China's Top Secret War: The Secrets of How You Can Be a Winner in the Financial War Between the American Eagle and the Chinese Dragon. Call 800-289-2646 or register here.

PLEASE NOTE: Must have valid phone number to process order.
If you forgot your username try our username reminder tool.

PRIVACY STATEMENT: We provide our clients with the highest quality of service and privacy at all times. All information is kept strictly confidential and is never sold or exchanged with any other entity.