Today's world is defined and driven by numbers.

But what if the numbers we're using are all wrong? What if everything, including money itself, is mispriced? What if only one numeraire matters in the end?

In 2014, author and Swiss America Chairman Craig Smith taught about us the importance of the word "numeraire" - which is an economic term that represents an ultimate unit of account and serves as a universal plumb line for all financial transactions.

In French, numeraire means money, coinage or face value. A numeraire is usually applied to a single good, which becomes the base good. All similar goods are then valued and priced against the base good. This comparison makes it possible to identify which goods are worth more than others. 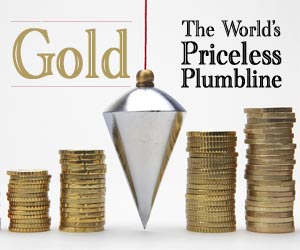 The U.S. dollar is still falsely presumed to be the world's numeraire, based on the mid-20th century Bretton Woods Agreement which defined a U.S. dollar as 1/35th of an ounce of gold. Linking the dollar with gold once provided a gold standard for all other currencies because the dollar was fixed to a defined weight of gold.

But today, with the U.S. dollar currently valued at 1/1200th of an ounce of gold, we have strong evidence the dollar is no longer a numeraire for anything! Yet somehow, the global financial markets appear to function and expand despite the widespread "mispricing of money" as economist Chris Martinson calls it, which he says creates a "mispricing of everything."

So if virtually every financial asset (stocks, bonds, T-bills, real estate, currencies, etc.) in the world is currently mispriced and misvalued in terms of U.S. dollars, what possible chance does an individual have to protect themselves against a worldwide currency and asset crisis?

Not much, unless they discover the timeless truth about money.

The solution - so simple it escapes most people and virtually every politician - is to Reboot! Convert some of your assets back into the original numeraire - GOLD! In recent years this solution is catching on and helps explain why central banks worldwide are suddenly stocking up on physical gold at the fastest rate in decades.

You may be asking, in today's upside-down financial world, isn't it possible then for gold to also be mispriced? Can speculators ruin even the purest form of money which has served the world as the ultimate plumb line of value since day one?

In the short-term, yes, all things are possible. In fact, some experts firmly believe the gold price is currently very undervalued and provides concerned citizens with a golden buying opportunity - especially for those who have not yet converted any assets into gold. But over the longer-term (5, 10, 25 or 40 years) gold prices are unimportant.

You could argue the price of gold never really changes at all in the exchange for goods and services, due to gold's unique 'store of value' qualities. But gold prices will always fluctuate in comparison to mispriced, fiat currencies; like the U.S. dollar.

As difficult as it may be, I'm asking you to forget almost everything you've been told about gold by a vast multitude of so-called experts. For example, every day the press refers to physical gold as being either a commodity or an investment, right?

Because Gold is the world's true numeraire, it explains why the Gold Standard provided a stable foundation of growth and prosperity in America for over 170 years (1792-1964). In fact, the buying power of Gold gradually increased over time, in stark contrast to the declining value of the dollar reflected in the rising cost of living.

Today virtually every currency, stock, bond and bank deposit is at risk of being mispriced. The daily headlines are screaming of the potential risks of new market bubbles created by the Federal Reserve's rampant artificial money creation over the last five years; as documented in The Inflation Deception, The Great Debasement, The Great Withdrawal and Don't Bank On It! books.

But not so for the ultimate Numeraire - physical money consisting of gold coinage will always be respected and accepted worldwide, because it is a pure, debt-free asset that can be held safely in your own hand. With gold in hand you're positioned to preserve your wealth for a lifetime as well as for the next generation.

Such is the secure and peaceful life behind the financial shield of a personal gold standard - no matter what "the numbers" may say, no matter how much mispricing is allowed by progressive politicians living under the delusion they can create money from thin air forever.

One day the rug may be pulled out from under the value of every single paper currency and investment on earth, but throughout all of history, physical gold coins have faithfully served as wealth insurance against runaway price inflation ... or worse!

When will this day of reckoning come? It could be tomorrow, in a month or even a year from now, but as Swiss America spokesman Pat Boone says, "Be prepared! It's better to be a month early, than one second too late!" In today's crooked world everyone needs a golden plumb line in order to build a portfolio that will stand the test of time.