10 Reasons to Double-Up on Gold in 2019
A Special Alert From Craig R. Smith, Swiss America Chairman
Introduction
2019 represents a golden opportunity to double-up on your precious metals holdings for many fundamental reasons. Perhaps the most obvious reason is that gold has been the single best performing asset since the beginning of the 21st century, with an average return of 19.73%. 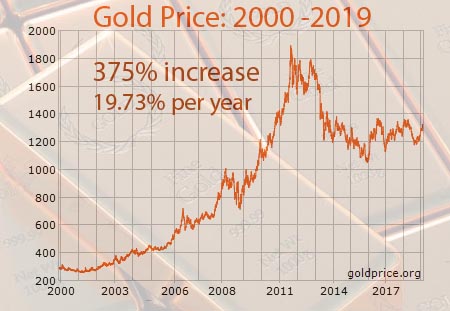 With this type of consistency and above average performance one might expect the mainstream financial media to recommend adding gold into a diversification strategy. Instead, gold is often ignored and treated as a 'barbaric relic' of a previous era.

Gold prices have quietly crept up over 10% just since November 2018, which may indicate the beginning of a new long-term bull market cycle.

Below are ten common sense reasons you should consider adding to your gold holdings this year...

1. Rising Political Uncertainty – With the 2020 presidential election in sight, Americans will soon be deciding whether to continue embracing free market capitalism or to vote in favor of progressively bigger government, higher taxes and less freedom. During the Obama years gold prices rose dramatically from $800 to $1,800 as economic and job growth slowed and investors sought gold as a safe haven.

2. High Stock Market Valuations - Investors are increasingly wary of stocks that are priced steeply relative to projected earnings. In 2018, a staggering $13 trillion vanished in equities worldwide. New York money manager, AllianceBernstein suggested there is now a “strong case” for gold over stocks due to high market valuations and record global debt. A number of economists, such as John Hussman, see equities as having the “most obscene valuations in US history.” Stock earnings and GDP are expected to slow dramatically in 2019.

3. Institutional & Billionaire Buying - When it comes to being ahead of the curve, big money has already turned to gold. Billionaires who have been buying gold include: Ray Dalio, founder of Bridgewater Associates; 'bond king' Jeffrey Gundlach, CEO of Doubleline; David Einhorn, founder of Greenlight Capital; and most recently Sam Zell, founder of Equity Group Investments, who announced on Bloomberg TV that he bought gold for the first time in his life. “Supply is shrinking and that is going to have a positive impact on the price,” said Zell. In addition, big institutional investors have piled into gold so far in 2019. Holdings in gold-backed ETFs rose 72 tons in January to reach 2,513 tons; the highest levels in six years according to data from the World Gold Council. Follow the money!

4. Rising Central Bank Purchases - Central Bank purchasing of physical gold is up 74% year-over-year reaching 651 metric tons in 2018; the highest annual net purchases since Nixon closed the gold window back in 1971! This trend has been accelerating for the past eight years. "Heightened geopolitical and economic uncertainty throughout the year increasingly drove central banks to diversify their reserves and re-focus their attention on the principal objective of investing in safe and liquid assets," said the World Gold Council. With the Fed pausing Quantitative Tightening due to market volatility and fears of economic slowing, some analysts believe central banks are increasing gold holdings in preparation for the next recession.

5. Growing International Risks - The geopolitical environment is the most dangerous it has been in decades, according to the World Economic Forum Global Risks Report. Some 90% of experts say rising tensions and further economic confrontation are the single most urgent risk in 2019. Addressing the US-China trade war, the state of the EU, NATO, the G20, Russia, Iran and Middle East tensions; Eurasia Group president Ian Bremmer recently said, “Every single one of these is trending negatively...in a way that hasn’t been in evidence since World War II.” Gold is the world's safest asset because it's accepted as money in every nation.

6. The Rising Cost of Living - Today most economists do not see inflation decimating the US; however the real rate of inflation is estimated at 2-3 times higher (6%+) the official government CPI stats (2%). Gold has a long history of preserving wealth during inflationary spikes. In Argentina an ounce of gold cost 270 pesos in 2000, today it is 50,000 pesos. In Venezuela an ounce of gold was 200 Bolivars in 2000. In 2019, gold now costs 327,000,000 Bolivars! Gold maintains purchasing power no matter what happens to fiat currencies in any nation. In fact, measured in 72 different currencies, gold is near its all-time high. Gold remains a bargain in U.S. dollars.

7. Increasing U.S. Dollar Weakness - Today the U.S. dollar enjoys its reserve currency status as the leading fiat currency in the world; but this status is quickly eroding. There are a number of factors weighing on the dollar, such as; a growing number of nations now shunning the holding of U.S dollars, growing recessionary fears, weaker U.S. economic and manufacturing data, and a Federal Reserve that will likely not be able to raise interest rates in 2019 - as it did in 2018. Mike McGlone, senior commodity strategist at Bloomberg Intelligence says, “The dollar is on thinner ice.” Recently gold prices have begun rising despite short-term dollar strength, which is a very bullish indicator for gold.

8. The Fed is Out of Bullets - No longer content with blowing one credit bubble at a time, the Federal Reserve and other central bankers coordinated their efforts between 2009-2018 creating today's “Everything Bubble.” This has not solved any of the long-term issues, it instead papered over the problem with a credit-speculative bubble of unprecedented enormity; which could multiply the next downturn. This also explains why the Fed desperately pushed interest rates upward in 2018, to give them some ammunition to fight the next downturn. Most experts believe the Fed will be unable to effectively bail out the economy during the next crisis without ramping back up Quantitative Easing by printing more money. But with their balance sheet already bulging, this could prove to be a futile attempt which will result in a dramatic increase in inflation.

9. Experts Warn of a Recession by 2020 - Three of the last four U.S. recessions stemmed from unforeseen shocks in financial markets and the next downturn will likely be no different. The U.S. expansion is set to turn 10 years old in 2019. This could be likened to attempting to inhale for a full decade, without ever exhaling; a feat only possible with artificial life-support from central bankers pumping in near zero-interest rate money. However history teaches us that every decade in the last century has been marked by at least one economic slowdown and/or recession. Today the U.S. economy (and the world) are running on borrowed time and money. Gold alone has an excellent track record of recession-proofing portfolios during major economic downturns.

10. Gold is a Proven Safe Haven - Gold is the only surviving currency with a 5,000 year record. This explains why a century ago J.P. Morgan said, “Gold is money. Everything else is credit.” Gold owners have a long-term perspective of the world and shun instant gratification. Gold is less of an investment and more of a store of value which also serves as a trustworthy medium of exchange. Empires and currencies come and go, but gold remains as the truest monetary plumb line over time. This is why it serves as the ultimate safe-haven which becomes even more valuable during times of rising economic turmoil and uncertainty such as we are presently facing.

Conclusion
The only question remaining is how much physical gold is right for you? I suggest reviewing your gold holdings with your Swiss America broker. Give them a call at 800-289-2646. Find out how much gold you should consider adding to your portfolio this year - before gold prices begin an even steeper upward trajectory.
Previous Feature Article: 2019: What Could Go Wrong?
Next Feature Article: The Most Seductive Four-Letter Word on Earth