Santa Claus was taken hostage by terrorists this past weekend in Chicago and might within days also be skyjacked in Baltimore.

On the busiest shopping weekend of the year, thugs blocked the doorways to Chicago stores.

The mainstream media described these gangsters as “law abiding,” even though they were committing assault and battery against would-be Christmas shoppers who tried to enter the stores. 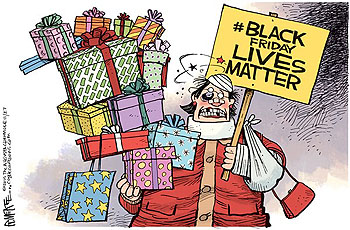 Chicago police, who days before had made a few token arrests as these bullies blocked entire streets into the Windy City’s shopping districts, made clear that the city’s Democratic political bosses had ordered them not to interfere with the urban terrorists who were by intimidation and force effectively shutting down these stores and preventing the store owners from making a living.

These goons described themselves as protestors against these same political bosses, who had kept secret a video from a year earlier of a Chicago police officer firing 16 shots into and killing a young African-American man.

The gangsters, however, could not credibly explain why this gave them any right to destroy the livelihoods of innocent store owners or to deny innocent shoppers their right to shop. These thugs were clearly engaged in criminal activity in constraint of trade.

They accuse Emanuel of business as usual, of giving police a free hand to control minorities in political machine-run Chicago. This, after all, is the city where the dead mysteriously return to life for every election, and five out of every three residents vote Democratic.

These protestors understand that Emanuel faced a rare runoff against a minority candidate, a reelection he won only last April. Most believe that he suppressed the police shooting video because of this.

And only days after his reelection, another Progressive Democratic machine city, Baltimore, melted down in anti-police riots following the alleged police killing of another African-American. Did Mayor Emanuel conceal his video because of the risk of triggering similar Chicago rioting?

The first of six police officers charged in the Baltimore case goes on trial on Monday, November 30, and these trials scheduled for the cold months of winter might re-ignite hot protests, arson and looting there, intimidating businesses and shoppers there, too.

President Obama and other Progressive politicians, eager to mobilize a large African-American vote in 2016 to maintain Democratic power, have encouraged urban and university protests.

This is a tricky political gambit, since most killings of African-Americans happen in cities that have long been under monopoly Democratic control such as Chicago and Baltimore.

Black Americans who truly want things to improve should pledge never again to vote for any candidate of the Democratic Party – which, as Craig R. Smith and I noted in our latest book WE HAVE SEEN THE FUTURE AND IT LOOKS LIKE BALTIMORE: AMERICAN DREAM VS. PROGRESSIVE DREAM, is historically the political party of the slave owners, the Ku Klux Klan, segregation and lynching, Jim Crow, Bull Connor, and the disproportionate aborting of African-American babies.

Progressives, as we document, have secured their power in places like Baltimore and Chicago by turning people into government-dependent welfare addicts.

In their utopian ideology, an all-wise, all-controlling government is to replace the American Dream with a collectivist, anti-individualistic Progressive Dream.

Progressive government is to replace the husband in every family, to replace work with welfare, to replace law with political redistribution, and even to replace morality and God with a cradle-to-grave Big Brother.

Government thus becomes a godless impersonation of Santa Claus, an Uncle Santa dispenser of things confiscated from the productive as an act of class warfare, and given to the unproductive to buy their votes.

As Baltimore’s Progressive Mayor Stephanie Rawlings-Blake said last April after ordering the police to stand down and let looters ravage her city: “We also gave those who wished to destroy space to do that as well, and we work very hard to keep that balance….”

Mayor Emanuel has now done something similar in Chicago to appease criminals. In effect, he let thugs take hostage the St. Nicholas in the hearts of Christmas shoppers who want to give gifts to others.

Rest assured that Mayor Emanuel collects crushingly high taxes from the stores he ordered his police not to protect. If Chicago were a moral and honorable city, it would immediately refund at least a year’s worth of taxes paid by such stores to recompense them for the lost revenue these gangsters in effect stole. This, of course, will never happen in cities where the Progressive rulers depend on the mob for their power.

The Friday following Thanksgiving is called Black Friday because it traditionally is the day when companies that have lost money and run in the “red” for almost 11 months suddenly start to make a profit at the start of the Christmas buying season.

Black Fridays matter, if freedom, law, fairness, faith, goodness and the true spirit of St. Nicholas in people’s hearts are to survive here.

This may explain why Mayor Emanuel let criminals skyjack the real Santa Claus on Black Friday weekend. Progressive politicians and their mobs now seem eager to put America permanently in the red.

If Chicago’s “protestors” care about saving black lives, why do they ignore the 93 percent of approximately 8,000 African-Americans murdered nationwide each year who are killed by other African-Americans.

The murder rate in Baltimore this year has soared by 53 percent, with more than 300 victims; more have been killed in Baltimore than in New York City, with 13 times more people, but arrests by beleaguered police in Baltimore have fallen by 30 percent because its Progressive rulers now favor the mob over the police. We have seen the future, our book’s title warns, and it looks like Baltimore. Are you prepared for this?

Our latest book was written to explain this dream war between the American and Progressive dreams, and to show how you can protect yourself and your family while helping to restore the American Dream.

To schedule an interview with Lowell Ponte and get a media copy of WE HAVE SEEN THE FUTURE AND IT LOOKS LIKE BALTIMORE, contact: Bronwin Barilla at 800-950-2428 or email bkbarilla@thefuturelookslikebaltimore.com